New Bridge to be built over Ganga parallel to Gandhi Setu; to cost Rs 3000 crore 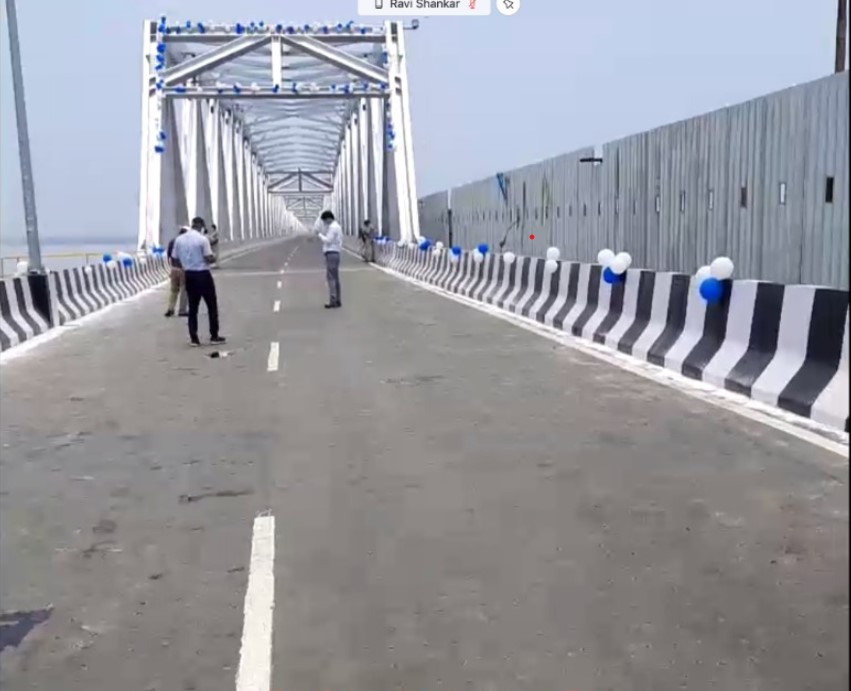 Traffic has started moving on the rehabilitated western flank of Mahatma Gandhi Setu, a lifeline bridge connecting south and north Bihar over Ganga river. The work on the eastern flank will start soon and expected to be completed by the end of 2021.

Union Minister for Road Transport, Highways and MSMEs Nitin Gadkari gave details about the new bridge on the occasion to mark the inauguration of the upstream carriageway of Mahatma Gandhi Setu through video conference on Friday. Length of the new bridge will be 5 km.

Gadkari said larger spans will be given in the new bridge to facilitate movement of ships under it. “Tender will be out next month, and the work will start soon. It will cost about Rs 3,000 crore,” the minister added.

Gadkari highlighted his government’s plan of developing national waterways network. Under this plan three metre depth of water has been ensured in river Ganga between Prayagraj in Uttar Pradesh to Haldiya in West Bengal.

According to Gadkari dredging has been completed between Prayagraj and Varanasi. In the next phase, one metre draft is being worked upon in river Yamuna between Delhi and Prayagraj. He informed that Rs 12,000 crore worth DPR has already been submitted to the World Bank for this phase. He hoped that soon his dream of waterway travel between Delhi and Haldiya will fruitify.

Mahatma Gandhi Setu is often termed as a lifeline bridge connecting south and north Bihar. It connects Patna in south to Hajipur in the north of Bihar. The bridge was inaugurated in May 1982 by the then Prime Minister of India Indira Gandhi. With 5,750 meters in length Mahatma Gandhi Setu holds the distinction of being the second longest bridge in India. In fact, till 2017 it used to be the longest bridge. Now Dhola Sadiya bridge over the Brahmaputra river in Assam is the longest bridge in India. It was inaugurated in 2017. The work on the western spans or the upstream carriageway has been completed. It was opened for traffic on July 31. It is being constructed at a cost of Rs 1742 crore. It involves replacement of the existing concrete superstructure of old bridge by new steel deck superstructure. Work on this bridge was started in June 2017.

This is a new type of work being executed in India for the first time. “This bridge had a unique problem. Its pillars were fine but slabs have been damaged,” said Gadkari.

Terming it an engineering marvel, the minister said rehabilitation of the Mahatma Gandhi Setu could be a good case study for civil engineering students. “This is the first ever bridge using modern technology for improving the existing structure,” he said.

The minister claimed that there has been remarkable progress in the National Highway projects in Bihar in the past six years. 747 km new NH has been built in Bihar since 2014. The total length of NH in Bihar has increased to 5301 km in 2020 from 4554 km in 2014.

At present, various schemes of Highway and bridges are in progress at a cost of about Rs. 27,270 crore. The Ministry has sanctioned more than Rs 10,000 crore to be distributed to the farmers as a compensation of their land being acquired for development of National Highways, as per the official statement released by the Ministry of Road Transport and Highways.

“Out of this, approx Rs.6800 core has already been transferred directly to the respective farmers as a compensation for their land being acquired for development of National Highways. The density of NHs per 1000 sq km in Bihar has been increased to 57.06 km which is equal to the various states,” it said.

Bihar’s Deputy Chief Minister Sushil Kumar Modi said the development of Gandhi Setu and other bridges and road projects are part of the Rs 1,25,000 crore package announced by Prime Minister Narendra Modi in 2019. Out of this total package Rs 53,000 crore is being spent on roads.

During the video conferencing meeting to mark the inauguration of the part of Mahatma Gandhi Setu, Kumar requested Union Minister Gadkari to consider another 2 or 4 lane bridge parallel to the existing Vikramshila bridge.

Kumar also emphasised on the need for developing a direct route between Buxar and Varanasi.

Another demand from the chief minister was for bringing uniformity in NH width for smooth flow of traffic.