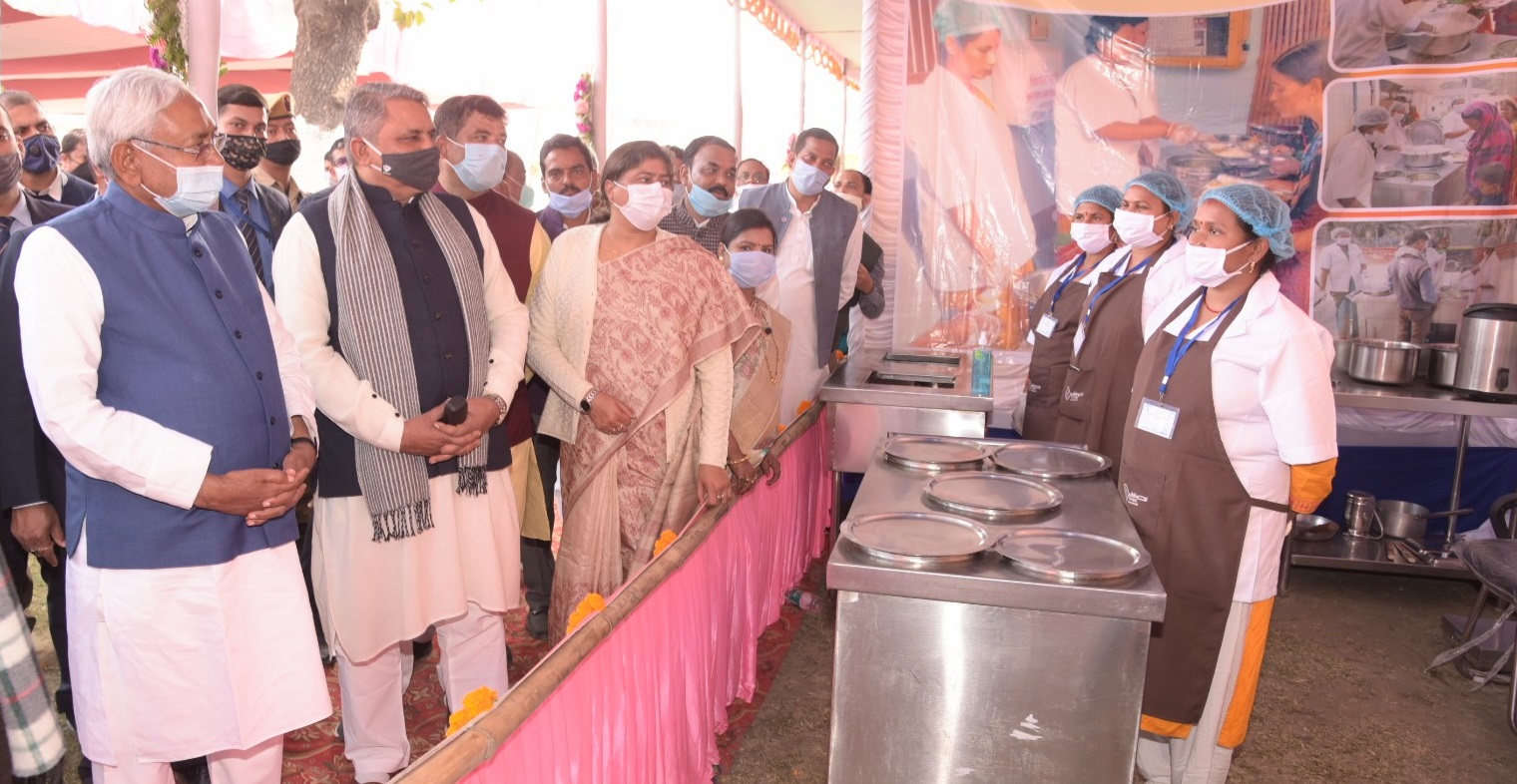 With a view to give a boost to livelihood and employment opportunities among rural women Chief Minister Nitish Kumar led government has decided to engage Jeevika groups in supply of food in all government hospitals and stitch school dress for students from 1st to 12th standard.

Decisions in this regard have been taken by the state cabinet chaired by Nitish Kumar recently. This is an important step towards women empowerment in the state.

Education Department gives money to students for school dress under different schemes. These include Mukhyaman tri Balika Poshak Yojana, Mukhyamantri Balak Posak Yojana and Bihar Shatabdi Mukhyamantri Balika Posak Yojana. Under these schemes students from class 1st to 12th standard are provided money to buy school uniform. As per a decision taken by the state cabinet on 19th January 2021, two set of dresses for all the students will be bought from Jeevika groups.

There are over 10 lakh Self Help Groups (SHGs) spread across 534 Blocks of 38 Districts in Bihar. These SHGs have been set up under Bihar State Rural Livelihoods Mission and locally named Jeevika groups.

Bihar’s Jeevika model of women empowerment is lauded nationally. Nitish Kumar often lists it as one of his major achievements.

“There is no big factory in Bihar. Still, the state’s per capita income is increasing, mainly because of Jeevika workers,” Chief Minister Nitish Kumar said while addressing an event organised by Bihar Rural Livelihoods Promotion Society at Dhamdaha block in Purnia district recently.

“My motive is progress in the society and it will happen only when women contribute to development works,” Kumar added.

Women empowerment has been among the focus areas of Nitish Kumar government. One of the components of Saat Nischay 2.0 is “Sashakt Mahila-Saksham Mahila”. The decisions taken by the government to boost employment opportunities among women are in tandem with the government’s agenda of women empowerment.

This will be an extension of the initiative called ‘Didi Ki Rasoi’. It was first started in Vaishali district hospital and was later extended to hospitals in Gaya, Purnia, Buxar, Sheohar, Sheikhpura and Saharsa. The Reserve Bank of India (RBI) signed an agreement with the Jeevika groups in November 2020 for supply of food to its employees. As per the deal food for 50 RBI employees in Patna is supplied from ‘Didi Ki Rasoi’ run by Jeevika group members.

According to Balamurugan D, Secretary, Department of Rural Development, the seed money for the ‘Didi Ki Rasoi’ comes from Jeevika group members themselves, thus all the members become a partner. “Didis are not the employees of Didi Ki Rasoi. They are the proud partners of their enterprise. Contribution of seed money to begin the venture entitles them for a partnership. They now earn a monthly salary and also get an equitable share in profit at the end of the year,” said Balamurugan.

“Didi Ki Rasoi has not only given a consistent means of income to the Didis, it has also generated employment opportunities for many other employees and other workers who work in these canteens,” he said.

Currently, the state government spends Rs.130 per patient per day on food supplied to patients in the district and sub divisional hospitals. This money will now be routed to Jeevika groups through Bihar Rural Livelihoods Promotion Society (BRLPS).

The BRLPS, under which Jeevika groups function, is an autonomous society under the Department of Rural Development, Government of Bihar.

Over 1.2 crore women are involved in more than 10 lakh Jeevika groups in the state. Jeevika groups would also be handed over the job of maintenance of ponds being developed under Jal Jeevan Hariyali mission of Bihar government.