Walking Back Home: Plight of Migrant Workers Returning to Bihar 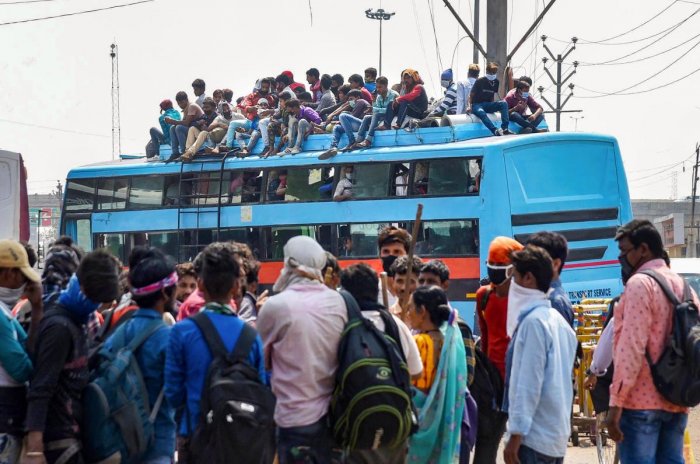 Other than Shramik Special train, carrying migrant labourers from different parts of the country, hundreds and hundreds of trucks are reaching various district headquarters of Bihar ferrying thousands of migrant workers on a daily basis.  The States and district administrations have made arrangements for food and also supplying water bottles at the railway stations

as well district centres before transporting them to quarantine centers in their respective districts and blocks by buses. The State Disaster Management Department is running about 3,665 quarantine centres at the block level in districts where currently over 1.3 lakh migrants are housed. About 2.5 lakh migrants are expected to reach the State in next one week by over 200 trains.

Bihar, so far, has reported over 1022 COVID-19 positive cases with nine deaths. More than 370 migrants have tested positive so far.

The nationwide lockdown and the consequent shutdown of transport created a humanitarian crisis in many states among the panic-stricken migrant workers, a large number of them took to the highways and started walking hundreds and hundreds kilometers to their homes. This reverse movement of thousands of migrants was a challenge in front of the Central Government along with the State Government. In order to give relief to all of them and prevent infection from spreading, the Central Government directed State Governments to make arrangements for safe shelters and proper arrangements of foods for the migrants.

Later on, on the request of state governments, the Central Government started the railway service to ferry back migrants to their home states.

The Supreme Court also ordered all concerned, that is the state government, public authorities and citizens, that they faithfully comply with directives, advisory and orders issued by the Central Government in letter and spirit in the interest of public safety. The court directed that the migrant labourer should be dealt with ‘in a humane manner’ and that ‘trained counsellors, community leaders and volunteers must be engaged along with the police to supervise the welfare activities of migrants’.

A pandemic of this magnitude is characteristically frightening because it bares the limitations of public health. In India, nevertheless, COVID-19 has revealed the condition of the labour force. More than 100 million workers have reportedly lost employment.

A pandemic of this magnitude is characteristically frightening because it bares the limitations of public health. In India, nevertheless, COVID-19 has revealed the condition of the labour force. More than 100 million workers have reportedly lost employment.

According to an independent data, of the total workforce in the country, over 90 percent (about 455 million) is informal, which means they work without social and employment security. However, the disposition of data collection does not permit us to know the precise number of migrant workers in this consortium.

At the international level, the commissioner for Human Rights, Michelle Bachelet also raised her concern and said in a statement that she was distressed by the plight of the informal migrant workers affected by the lockdown, many of whom were, in effect, forced to leave the cities where they worked. However, she hailed the Indian Government’s efforts to address the crisis by providing proper shelter, food to these migrants, who were returning to their native places and actually a carrier of virus. This kind of chaos only happened in the country at the time of India-Pakistan partition in 1947, when millions of people from both sides were strangled at borders.

It is well documented that the migrant remains among the most vulnerable groups. In India as per the census, the level of urbanisation has increased manifold and stands at 31 percent in 2011, which resulted in demographic explosion and poverty-induced rural-urban migration.

It is well documented that the migrant remains among the most vulnerable groups. In India as per the census, the level of urbanisation has increased manifold and stands at 31 percent in 2011, which resulted in demographic explosion and poverty-induced rural-urban migration. A large number of people from rural and backward areas have started to migrate to cities and developed states for better livelihood opportunities. This is reflected from rising number of inter-state migrants that increased from 42.3 million in 2001 to 56.3 million in 2011. From the total inter-state migrants, one-third (30.3 percent) i.e. 17.1 million were migrated for the economic purposes. The Economic Survey 2017 further estimated that at least 9 million people migrate between states annually within the country with 33 percent of them for economic purposes. If this trend continues, the inter-state migrants are estimated approximately around 146 million at present with 47 million migrant workers. Over 90 percent of the migrants are estimated to be males and the top sourced places are Uttar Pradesh and Bihar, while the top destinations places for migration are Delhi and Mumbai.

A conservative estimate of migrants in this informal workforce would be more than 100 million (some estimates suggest up to 140). The growing informalisation, particularly in occupations of urban centres based on migration, reflects the casualisation of labour. The current labour strategies of survival by walking and withdrawing can barely be understood in terms of ‘temporary displacement.’

WITHOUT ANY SOCIAL PROTECTION

The disparity of power between capital and labour and the constraint of the state’s welfare mechanisms were all put into uncertainty when migrants walked on the highways and expressways of the flourishing new India.

These migrants principally engaged in casual wage jobs in informal sector—construction workers, street vendors, restaurant employees, delivery persons, rickshaw pullers, and so on — which is precarious and day- to- day work without any social protection in the event of abrupt cancellations that has happened with the lockdown. Most of migrate come alone to destinations and visit to their native places several times in a year. They remain connected with their family and deeply rooted with native places. That is the reasons most of the migrants at the time of national wide lockdown eager to return to their native places or villages. But this is really unfortunate that why our cities looks so cruel to migrant who run urban life with their hard work and why only the state government is responsible for their well-being. While they are not only the economic driver of destinations places but also play a vital role in development and growth of industries, businesses, people and many others.

Evidently, the state governments are taking care of these migrants at present but the companies, businessmen, contractors and other highly paid service workers hardly come forward to help those migrants during their hard time. In this context, the Telangana Chief Minister K Chandrasekhar Rao was one among the first persons, who went all out to prevent exodus of migrant labourers and assured all help to them and announced in ‘Hindi’, the language most of the migrants workers understand “You are the key driver of our state economy, we will make all the arrangement and provide you shelter, food and daily cash of Rs 500 during the lockdown period and urge you to stay back”. However, similar statements also come from others, such as Chief Minister of Delhi, Haryana, UP and Maharashtra and many others. Prime Minister Modi has also realised the tragedy of migrants’ workers and apologised in Mann Ki Baat, but not a single industrialist, businessmen or others has made such a gesture.

A large number of migrants have already reached to their villages, and millions of others who are currently at the quarantine centres and in the shelter homes and many who decided to stay back in cities are desperately waiting for the end of lockdown period to move their native places. This time many labourers will not come back due to shock, which means that most of small and medium-size companies/factories and other businesses may face the heat once the lockdown period is over. There would be a shortage of labour or contract skilled workers and households also find tough to run their daily work without the helpers/drivers/maids etc. The production and profits of small/medium size factories or businesses will suffer due to shortage of labourers and other, contract skilled workers. The reason behind this may be the scale of their production would get reduced and their wage bill will also be raised due to higher payment to retain the limited available labour-force.

This time many labourers will not come back due to shock, which means that most of small and medium-size companies/factories and other businesses may face the heat once the lockdown period is over. There would be a shortage of labour or contract skilled workers and households also find tough to run their daily work without the helpers/drivers/maids etc.

In this process, the sources states will also have the burden of rising labour force with more unemployed or underemployed people. They need to create more job opportunity in rural areas particularly in non-farm activities with a gainful employment to those migrant who do not want to go back to the cities.

The pandemic-induced lockdown has not created this ‘crisis’ of labour. It has instead taken the lid off the idea of ‘usual times’ and exposed the structural forces of disruption that are part of the story of three decades of India’s economic growth: urbanisation, gendered patterns of work and migration and the emergence of the biometric state, all of which have been robustly promoted by corporates and the state.

All in all, this national lockdown period may offer many lessons to employers, workers and governments. For migrants distance matter and the lockdown have given a new lesson that could lead to a significant reduction in long distance migration. A number of migrants who fled to the big cities may now prefer to work in their marginal farm or find work in nearby towns. It could deprive many manufacturing units and business centers in Delhi, Mumbai, Gujarat, Maharashtra, Andhra, Kerela, Punjab, Haryana and other places for a long period of time and the units are likely to face a recession.

While the predicament has disclosed the nuances of structural economic imbalance, the disaster itself has not manifested because of the cracks inherent to the relationship between capital and labour. The workers are not running off the cities because of complaints against work conditions, wage arrears, or any other work-related demands or grievances. To be more precise, an outwardly forced displacement has revealed, rather than shaped, an unfathomable structural crisis.
The big question – from whom are these workers running off? The state, the system or the settings? The answer is to be perceived than to be speculated.

After having spent around two decades in active journalism, Dr Praveen K Singh is well-recognised as an expert on editorial strategy, media management and social outreach initiatives. As the founder of Rural Connect, a publication aimed at enlightening and edifying urban readers about the grassroots realities, he achieved several journalistic feats. He has held senior editorial positions across domains with country’s leading news brands including The Indian Express, The Times of India, India Today and Zee News.