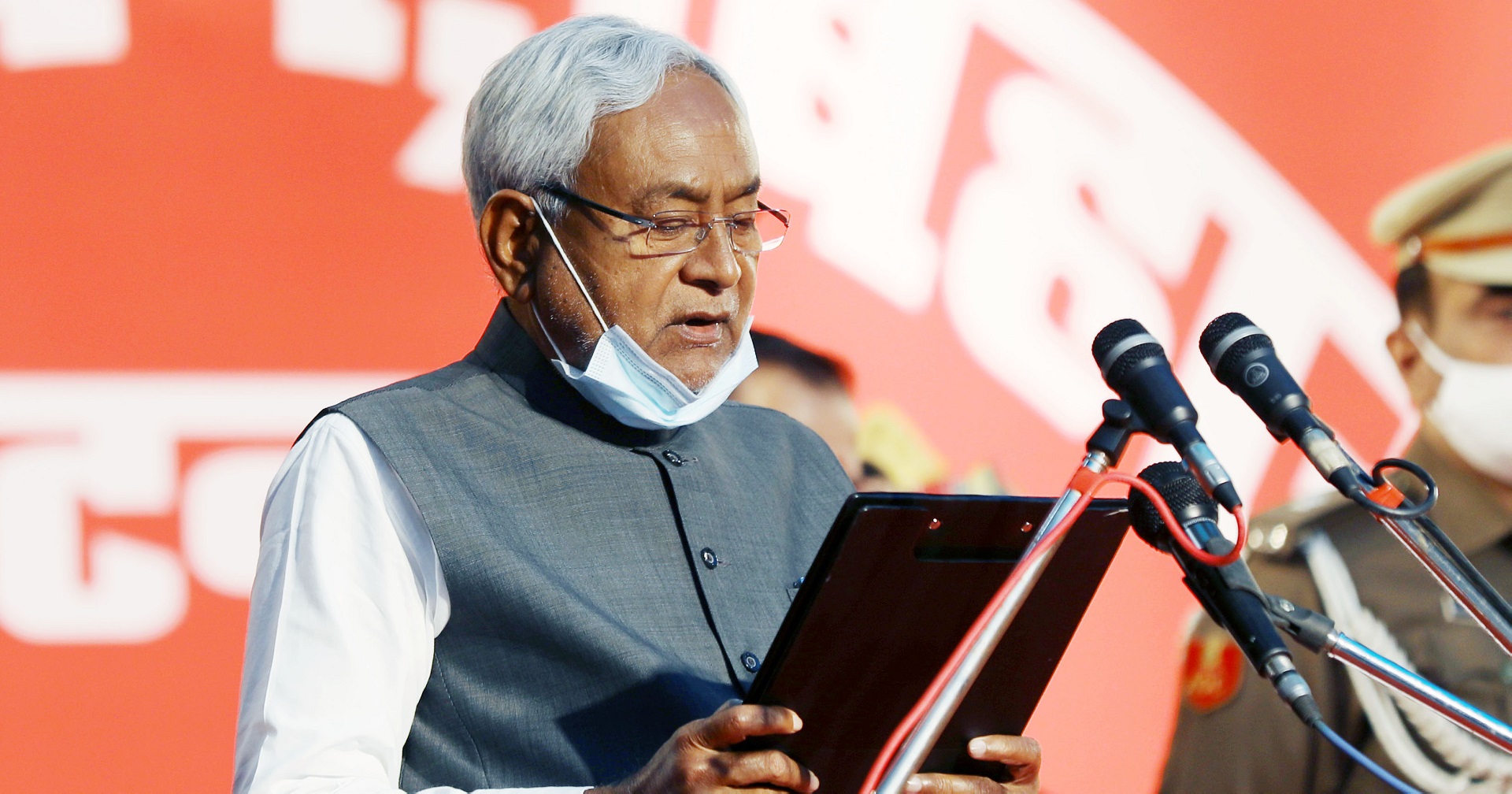 One of the first onerous tasks of Nitish Kumar was to put back law and order in shape, and he did it deftly. Secondly, he went about ensuring that the livelihoods of the majority of Biharis, who depend on agriculture, was not affected. The state’s record on agriculture speaks for itself. In the last 5 years itself, for instance, Bihar’s agriculture growth rate has been at 7 per cent against the national growth rate of 2 per cent. Thirdly, the overall growth rates of Bihar too have surpassed that of national average. Against India’s average growth rate of 7.5 per cent between 2011-12 to 2018-19, Bihar’s rate has been at 13.3 per cent. The figure was 8.3 per cent and 11.7 per cent for the period between 2004-05 and 2011-12.

Fourth, Bihar’s literacy rate among girl child has consistently seen improvement – it has grown to 61.1 per cent now from 56.9 per cent in 2015-16, as per 5th National Family Health Survey 2019-20. Bihar has given a new template of women empowerment to the country. Bihar was the first state to declare 50 per cent reservation for women in Panchayats and urban local bodies in 2006-07. We have addressed gender inequality consistently and many of our flagship schemes such as the Arakshit Rozgar Mahilaon ka Adhikar (employment for women), Mukhyamantri Kanya Utthan Yojana (for the girl child) and Mukhyamantri Balika Cycle Yojana (to reduce the gender gap in education) bear testimony to this. Bihar has also seen a significant rise in the number of women owning a bank savings account – from 26.4 per cent in 2015-16 to 76.7 per cent in 2019-20.

It is equally noteworthy that between 2005 and 2020, 96,500 kms of rural roads have been built in the state connecting nearly every habitation. It is well known how we have created a network of roads and bridges across the state, enabling better access and mobility for people, a vital ingredient of development. Between 2005 and 2020, the planned budget expenditure of the state’s Road Construction Department has been a whopping Rs 54,461 crore.

Sixth, there has been significant progress on the human development front. Between 2011-12 and 2018-19, the level of Per Capita Development Expenditure (PCDE) in Bihar has grown at 14.2 per cent, compared to the national average of 13.3 per cent. The expenditure on education in the state increased at an annual rate of 13.8 per cent, which is higher than that of the all-India average of 12.8 per cent. The expenditure on health also registered an annual growth rate of 20.8 per cent, and was higher than that of the all-India average. To provide a boost to child welfare-related works, Bihar has started the ‘child budgeting’ as well as recorded a decrease in total school dropouts from 2.17 lakh in 2016-17 to 1.44 lakh in 2018-19. Significantly, the percentage of elementary schools with drinking water facilities in Bihar increased from 93 per cent in 2011-2012 to 99 per cent in 2016-17

Seventh, we have made rapid strides in agro-industries and other sectors, addressing employment and livelihoods. For instance, an enabling policy environment has led to egg production rising in the state from 111.17 crore in 2016-17 to 176.34 crore in 2018-19 and the total fish production has gone up from 4.79 lakh tones in 2013-14 to 6.02 lakh tonnes in 2018-19. Similarly, the annual growth rate of operational agro-based factories in Bihar was 16.4 per cent over the last 10 years, compared to only 3.3 per cent at the all India level. In tandem, Bihar has given record productivity in major crops –rice, wheat and maize; and as a befitting corollary to these signs of progress, the state was bestowed with the Krishi Karman award for rice production in 2012, for wheat production in 2013 and for maize production in 2016.

The per capita consumption of the electricity in the state has risen from 145 kwh in 2012-13 to 311 kwh in 2018-19, implying growth of 114 per cent in six years and the availability of power has increased from an average of 6-8 hours to 20-22 hours in rural areas and from 10-12 hours to 22-24 hours in urban areas. All this is enabling better standards of living, better access and avenues for education and enterprises.

The state’s thrust on providing a focused impetus for industrial growth is reflected in the recent amendment to the Bihar Industrial Investment Promotion Policy 2016 which has expanded the scopes of Bihar’ key priority sectors, namely Food Processing, Small Machine manufacturing, IT, ITeS, Electrical and Electronics Hardware manufacturing, Wood-based Industries and General Manufacturing sectors, besides the introduction of new schemes such as the District Industrial Innovation scheme and Skill Mapping by District Counseling Centers.

It is pertinent to note that much of the above is part of providing enabling infrastructure support for the workforce returning to Bihar post lockdown. For instance, under the District Industrial Innovation Scheme, a Start-Up Zone has been set up in West Champaran district where products made by artisan-artists, who have returned from Delhi, Punjab, Gujarat and even foreign countries like Qatar, are on display. Several such manufacturing centers are being set up in districts across the state.

Special land pool of around 450 acres has been earmarked for preferential allotment to industries proposing to set up units in Bihar. I am as much pleased to inform that a special cell is being set up in Chief Minister’s office for facilitation of global investors and Bihari Diaspora, who have displayed lot of interest in the ‘New Bihar’ of Nitish Kumar.

Eighth, in the August of 2020, Bihar became the first state in the country to have brought together and successfully collectivized over 1.22 crore women in 10.18 lakh self help groups (SHGs) through the length and breadth of the state. The groups have successfully transacted 13,871 crore of credit under the Jeevika umbrella, a World Bank-supported poverty alleviation program operational in the state since 2007 to empower women and make them self-reliant. Jeevika benefited 45.5 lakh households through its various activities during the Corona pandemic, a remarkable achievement for Bihar in the field of women’s empowerment, which got ignored in your article.

Ninth, and a blatantly ignored achievement of the state in your article, relates to the visionary climate change initiative –Jal Jeevan Hariyali Abhiyan – undertaken by Bihar at the behest of Hon chief minister. You would note that not only is this initiative a novelty in India, but it has also won gleaming accolades from global leaders and the United Nations for its path-setting appeal as a comprehensive ecological program and its potential to address the carbon footprint issue. At UN’s High-Level Climate Change Roundtable on 24 Sept 2020, Shri Nitish Kumar was the sole dignitary invited from India and he used the occasion to share highlights of Bihar’s environmental initiative with the august global audience. This is possibly also unique in that we sought to get the vision and concept of the initiative ratified by a special joint session of the state legislature in July last.

Tenth, the Bihar government did commendable work during the pandemic, with measures including transferring financial assistance directly to the accounts of twenty-one lakh of stranded migrant workers through the Bihar Sahayata Mobile App. This led to the state winning the pandemic category of Digital India Awards 2020. Also, in a first for the country, Bihar government carried out a massive “skills survey” of migrant workers returning to the state during the nationwide lockdown for their skill profiling.This database of skills of Bihar’s migrant population would help various departments in creating skills-based employment opportunities to improve their economic conditions.

Eleventh, other relief measures included sending direct assistance to the bank account of 1.64 crores ration card holders, 2.1 million families stranded outside, and 1.6 million families in Bihar during the lockdown as part of assistance to different categories of people. Additionally, three months’ pension was given in advance to the elderly on the instructions of the Hon Chief Minister, which benefited 1.8 million elderly people. Similarly, we ensured timely disbursement against uniform, meal, books and related assistance schemes through DBT to all bank accounts associated with school students of the state.

(Sanjay K Jha is National General Secretary of JDU and MLC, Bihar. This article was first published in Financial Express.)